With the exception of just a few years, the first 20 Rumble on the Ridge tournament championship games have lived up to their billing.

There has been just one single point final, one four-point final and only one, five-point title game. 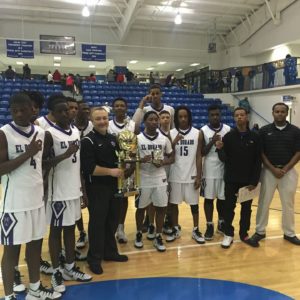 Last year’s championship game ended in a three-point victory for El Dorado, who claimed its second consecutive tournament title after winning the 2015 title. The Wildcats are the only team to score 100 points in the championship game.

Only two of the first 11 championship games were blowout victories, being decided by 15 or more points.

2015-The El Dorado Wildcats, making their first appearance in the 19th Rumble on the Ridge, took advantage of an outstanding performance by 6’10” junior Daniel Gafford to claim a 102-85 victory over Forrest City in the tournament’s championship game at Mustang Arena on Saturday. With the win, El Dorado becomes the sixth Arkansas team  and the third in the past three years to win the tournament Gafford, after an almost nonexistent appearance in Friday’s semifinal win over East Ppoinsett County with just two points and an early exit in the third quarter after picking up his fifth personal foul, rebounded to dominate the Mustangs scoring 36 points, 14 rebounds, three blocked shots, two steals and two assists.

El Dorado turned back Hoover, Ala., 79-62 ina first-round game and then defeated EPC 82-49 in the semifinal round, to move into Saturday’s final against Forrest City, the defending Rumble on the Ridge champions, Forrest City.

2014—Finally, the home team got to hoist the championship trophy.

Forrest City, eight months after winning the Class 5A state championship, made their second appearance in the Rumble championship game and defeated North Little Rock 91-81 to win the tournament for the first time since it began in 1997.

And they did it without a player taller than 6’2” on the floor.

Led by guard R.J. Glasper’s 30-point night, the Mustangs pushed a slim 61-59 lead after three periods to the 10-point victory.

2013—Rumble on the Ridge fans came for a shootout. They got a blowout.

KeVaughn Allen scored 23 of his 25 points in the first half as North Little Rock cruised to a 68-41 victory over the Jonesboro Hurricane in the final of the 17th annual Rumble on the Ridge at Mustang Arena.

Anton Beard, now an Arkansas Razorback, was instrumental in helping North Little Rock build a 22-8 lead at the half.

Southwind is 8-1 in nine Rumble on the Ridge games and winners of their last six tournament games.

2011—Southwind returned to the Rumble to take care of some unfinished business in 2010, but unfortunately lost to Bossier City, La. in the tournament finals and settled for second place.

Bossier City finished the tournament at 3-0 and became the second Louisiana team to take home the title.

2009—The Conway Wampus Cats became only the third Arkansas team in the history of the Rumble on the Ridge to win the boys basketball tournament.

It was the first All-Arkansas final in 13 Rumble tournaments.

2008—Austin-East became the third Tennessee team to win the Rumble on the Ridge using 23 points from tournament MVP Chance Jones.

Travei Pryor’s layup with 18 seconds left in the game proved to be the game-winning points.

2007—Duncanville became the first Texas team to reach the Rumble on the Ridge finals and faced Putnam City, the first Oklahoma team to play in the tournament.

Duncanville survived five ties in the fourth period to escape with a 66-62 win over Putnam City.

Duncanville had four players in double figures, led by Shawn Williams, the tournament MVP, with 17 points and eight rebounds.

Putnam City got 23 points, eight rebounds and one blocked shot by Xavier Henry.

2005—Thaddeus Young led Memphis Mitchell to the 2005 tournament title by scoring 31 points in a 79-77 overtime win over Northside, La.

2003—Pulaski Academy from Little Rock, became the second consecutive Arkansas team to win the Rumble. The Bruins held off Denham Springs, La. 50-48 in the finals.

2002—The Little Rock Parkview Patriots earned the honor of becoming the first Arkansas team to win the tournament.

Marietta became the first Georgia team to play in the finals.

2000—Forrest City became the first Arkansas team to reach the tournament finals, but lost to Lee, Ala. 72-65.

1998—Grissom, Ala., after finishing second in the first Rumble in 1997, returned to claim the prize.

Marvin Stone, Grissom’s 6’10” center, powered Grissom with 24 points and 14 rebounds. Stone went on to play at Louisville and Kentucky.

1997—Minor, Ala. hit 14 consecutive free throws in the final two minutes of the tournament’s first-ever championship game to defeat Grissom, Ala. 67-60.